REVIEW: Buffer, How to have Simple & Effective Social Media Automation

Summary: Buffer is a social media management tool, specialising in social media content management. It is similar to Hootsuite, runs from a web browser, and prides itself in simplicity without compromising effectiveness. We will review Buffer in this blog post and see why you should get it What is Social Media Automation?

Buffer has a very simple to understand and clear dashboard. The ticks indicate default profiles, you can select and deselect single or multiple accounts and you post your posts via the input box on top. Now, Buffer has a "power scheduler", but I have never seen the need to use it. The power scheduler looks like below: The beauty of the power scheduler is that you have more control over your social posting and you can coordinate across different pages better. It is a lot easier to mix up your posts across platforms with the power scheduler and repeat posts after a certain period. It is basic but allows you to do the necessary things to post across platforms with ease.

The "Awesome Plan" , which is the most basic plan offered in Buffer at $10USD is very affordable and comes with basic analytics, seen below:

The more advanced plans have richer analytics, but I am pretty happy with the current analytics in this plan.

This leads us to the topic of pricing. Below is the Buffer price table: Now, to give context to these pricings, we will look at their main competitor, Hootsuite: 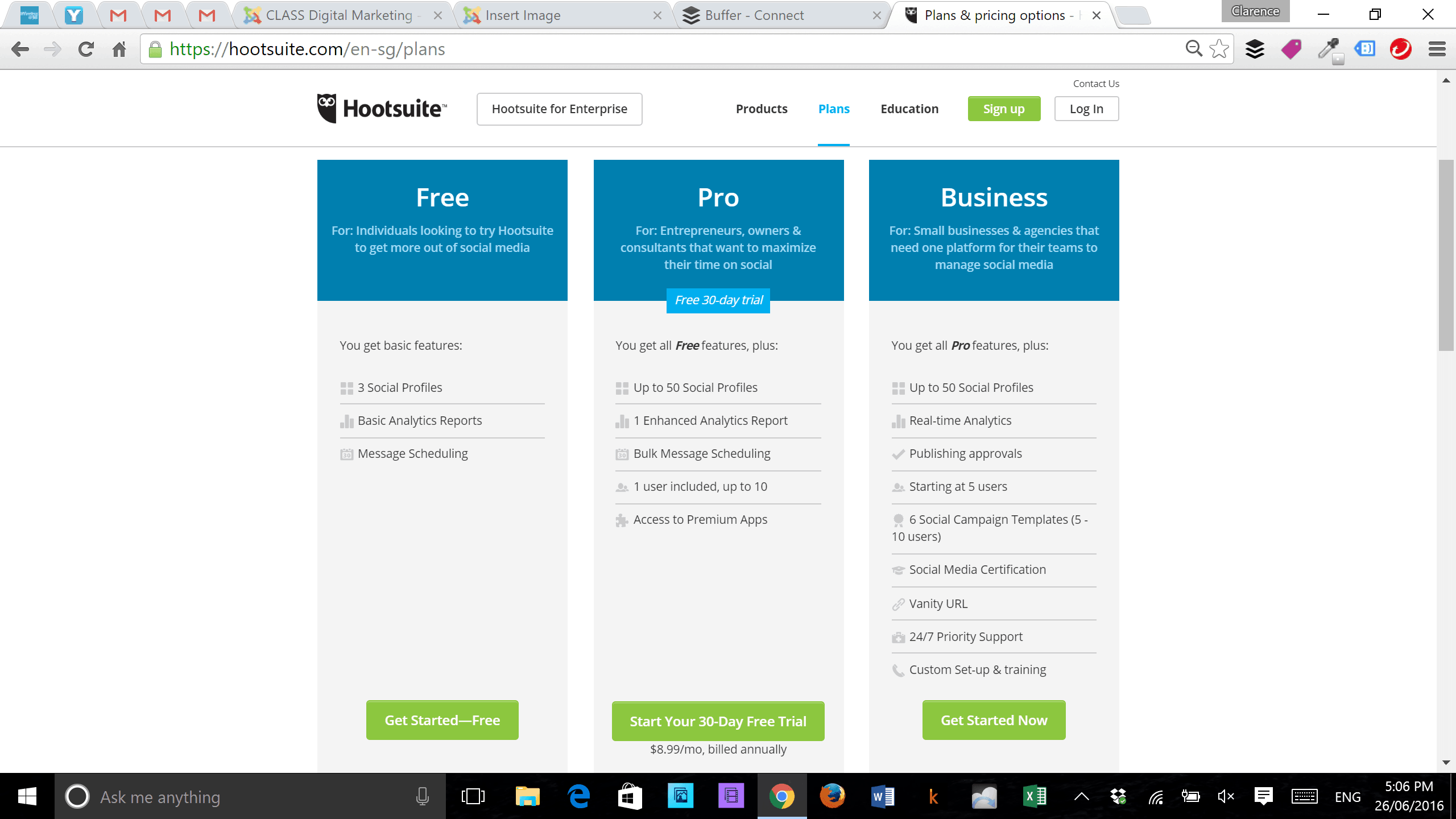 Hootsuite wins here because their Pro account is cheaper and better than even the lowest paid tier in Buffer, the Awesome Plan. But if you pay Buffer an annual subscription, the Awesome Plan is marginally cheaper than Hootsuite. However, Hootsuite is not immediately forthcoming with Business account fees, and Buffer might be cheaper, but I cannot confirm this.

Buffer has a very easy to use Optimisation Tool, which you can see below: Now, Hootsuite also has a similar tool, so Buffer is equally matched here.

So Why Choose Buffer

I use Buffer. I love it. But why I chose this instead of more advanced tools like Hootsuite is basically because of simplicity. Buffer is good at what it does - posting content. It does not pretend to be anything else. Hootsuite is a social media management tool and can monitor social activity on Twitter - but you can also do it for free on Tweetdeck.

So what else has Buffer got to give it an edge? Buffer can add functionality by third party apps: Admittedly, its not as wide as the Hootsuite App Directory, but at least there are high quality apps on it.

Buffer also has Pablo, a stock photo and editing web app, making it easy to source photos and add text: But there is one appthat Buffer integrates better than Hootsuite and that changes the whole game, because it is one useful and essential app for any serious social media agency. That third party app is a trade secret, but I am willing to reveal it in an eBook. What I can tell you, is that Hootsuite's scheduling API is not compatible with it.

So, if on a budget, Buffer is better than Hootsuite.

In sum, my review is as follows: Clarence Ling is the founder and business owner of CLASS Digital Marketing. He is a self trained Joomla Front End Web Designer and a Digital Marketer, constantly procuring the latest martech (marketing tech) and incorporating current developments in marketing. Based in Perth, Western Australia, he is also a real estate agent in Malaysia, selling Australian property overseas, attached to the largest and best East Malaysian real estate agency, Kozin Real Estate Sdn Bhd. Clarence regularly commutes between Australia, Malaysia and sometimes other parts of Asia in his line of work.